hwcrypto is a umbrella name for a set of specifications, software and API-s, to enable the use of X509 PKI based eID cards on the web for signing and authentication. It is designed to be vendor neutral and horizontally re-usable, to compete with the proliferation of proprietary, sector-specific vertical implementation silos and to avoid the resulting “nascar problem” on end users and integrators alike.

(Note on naming: the techie name “hwcrypto” is only visible to developers, not end users)

It consists of three major parts:

Being a collaboration platform for real-life integrators is another goal of this open source effort. 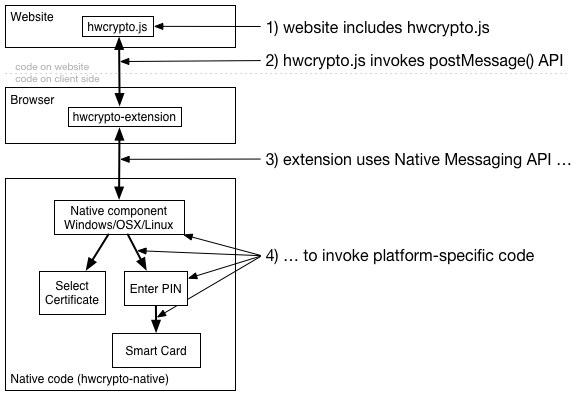 A bunch of other efforts are underway to define an API, to be implemented by browser vendors, to facilitate access to cryptography, including hardware devices.

Some other initiatives with working code and standardisation efforts exist, that allow to bridge the gap between a website and a hardware token, by exposing a common “transport mechanism” to JavaScript: